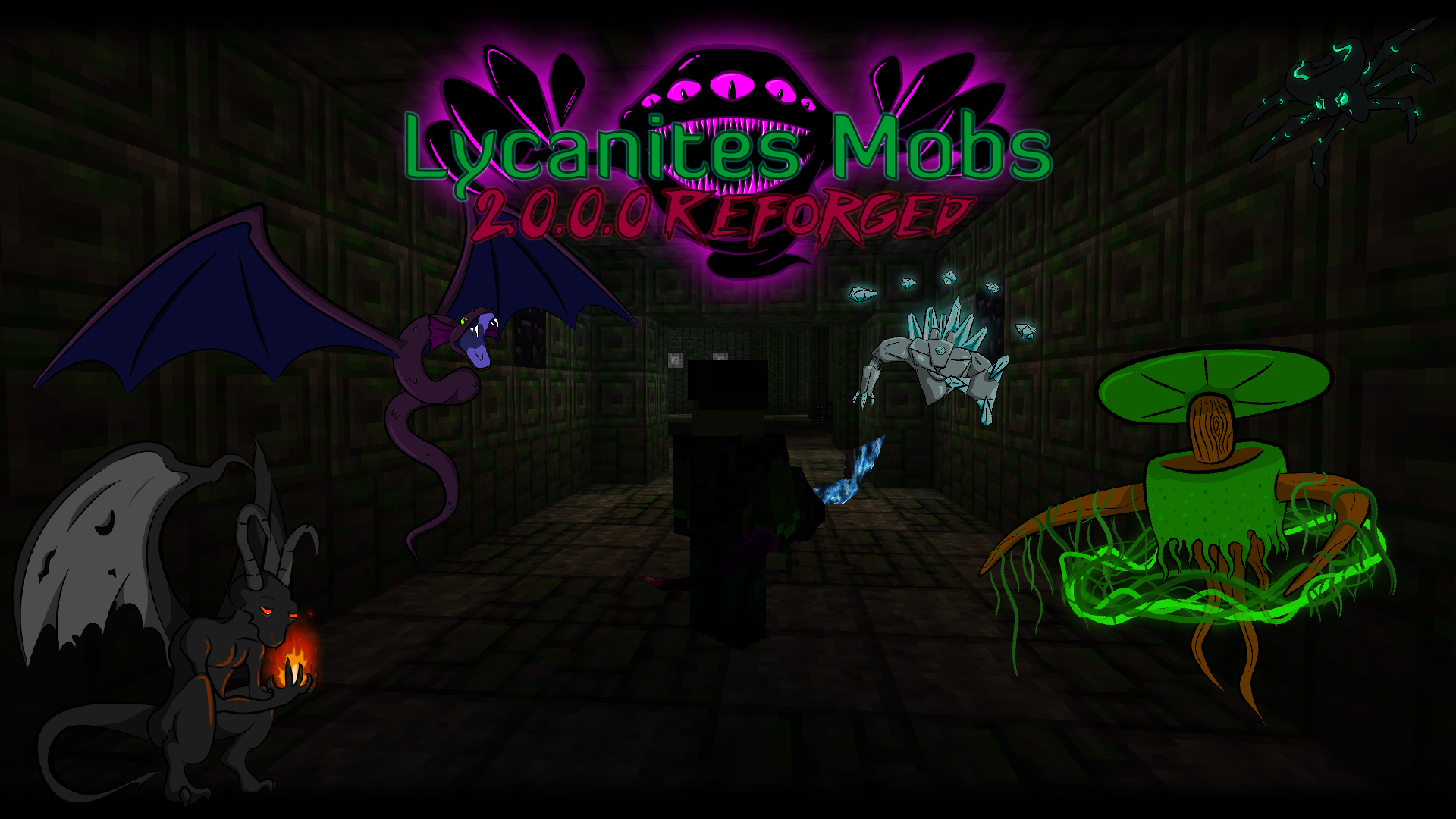 IMPORTANT: This is a huge overhaul of Lycanites Mobs and will remove anything from this mod from old worlds. This update will also clear the configs and jsons as many things have been changed.

Lycanites Mobs is now just one big mod instead of a package of several mods.

Added new Creature Types along with new spawn eggs for these types and a reorganized Beastiary.

Added additional creature information to the Beastiary and overhauled base descriptions.

The Summoning Pedestal now has a much cheaper crafting recipe but requires Redstone Dust or Blocks as fuel.

Added two new random dungeons: the Lush Tombs (found in forests, swamps and jungles) and Desert Crypts (found in deserts and mesas). Modded biomes that use biome tags will also have these dungeons.

Added two new sets of building blocks: Lushstone and Desertstone, used by the new dungeons and easy to craft.

Added new Bleed effect that causes damage when moving. Nymphs, Barghests and Gekens will inflict this.

The Cinderblade equipment part can now fire Embers and the Remobra Wing can now fire Venomshots. The Ember Scepter and Venomshot Scepter have both been removed, the Cinderfall Swords and Venom Axeblades will also be removed in upcoming updates as well with them being replaced with these much better equipment parts.

Added a new language system where multiple lang files can be loaded from a directory such as en_US on top of the vanilla lang files.

With the removal of sub-mods, all configs are merged into single config files general.cfg, mobevents.cfg, spawning.cfg, etc.

Support for custom json Projectiles has been added and the Ember and Venomshot projectiles have been converted, I plan to convert all projectiles eventually.

Each creature json now includes "modelClass" that points to a Java Class for their model. "class" (for the Entity AI class) has been renamed to "entityClass".

The "effect" and "amplifier" creature stats are now "effectDuration" and "effectAmplifier".

Due to the merge, all ids are now prefixed with "lycanitesmobs:", nothing else.

Dungeons are now enabled by default.

Shadow Temples now only generate in swamps, dark forests, mountains and the End.

Demonic Temples now only generate in the Nether.

Many creatures now spawn in additional biomes such as Lurkers in forests, Gekens in swamps and Threshers in oceans, information on where each creature can be found is now provided in the Beastiary.

The Crystal element has been renamed to Gravity and Electric renamed to Lightning.

Wisps will now burn nearby creatures that should burn in sunlight such as Zombies or Ghouls.

Creatures that should sink in water such as Hermas will now do so.

Fixed a bug where Life Drain and Poison Ray lasers could not shoot into water.